Just a punk hippie, book obsessed chick sharing my quite biased opinions on books and  whatever else flips my skirt at the time.  Especially if it's about kitties.  Or Jim Morrison. 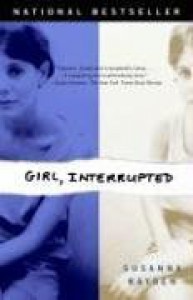 "A lot of mind, though, is turning out to be brain. A memory is a particular pattern of cellular changes on particular spots in our heads. A mood is a compound of neurotransmitters. Too much acetylcholine, not enough serotonin, and you've got depression.

When I first started reading this, I was expecting something along the lines of the movie based on it.  I didn't get it, but I think that is both a good and a bad thing.  It's bad in that I don't feel that Kaysen's writing was fully capable of capturing the dynamics of the characters that were played outstandingly in the movie.  Really, I don't find that there was ANY character depth at all in the book, even from Kaysen herself.  The entirety of the book felt like it just skimmed the lives and feelings of everyone.  There was no real connection to what anyone was feeling.  You read what was happening and you wanted to connect and feel, but you just couldn't do it.  On the flip side to that, it was good in that by the end of the book, that lack of depth and connection to other people really served to give me insight into how Kaysen actually felt in that time.  She was struggling to find a way to connect with herself and other people around her and it showed throughout the entire book.  I'm not sure if that was her actual intention or if it was poorly written, but either way I felt that it was a depressingly accurate portrayal of dealing with depression at such an influential time of life as adolescence.

There is a part of me that wishes that I could have seen the fleshed out characters that made the movie as good as it was, but at the same time I respect what I actually got from the book.  At the moment, I'm not really sure which one I liked more.  The book was more realistic for me though and that alone speaks volumes.